THE BRIDGE has been realized by a live connection between two large-screen units which were connected to each other via the internet, and on both sides provided with special detection cameras. Visitors on both sides could see each other and live locally, playing a game together. Were initially linked between Sergels Torg in Stockholm and the Plein in The Hague. Later, stationed at TodaysArt Festival in Scheveningen. 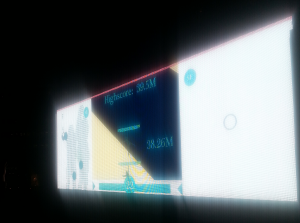